It’s not common I would write about the same establishment in two consecutive blogs, but to refrain from writing about burgers and beer is not only daunting, but downright impossible. I mean, why would I ignore a burger throwdown, notably if Moody Tongue is there, too? While watching people compete, you can munch on your own burger and beer. Sounds good to me. 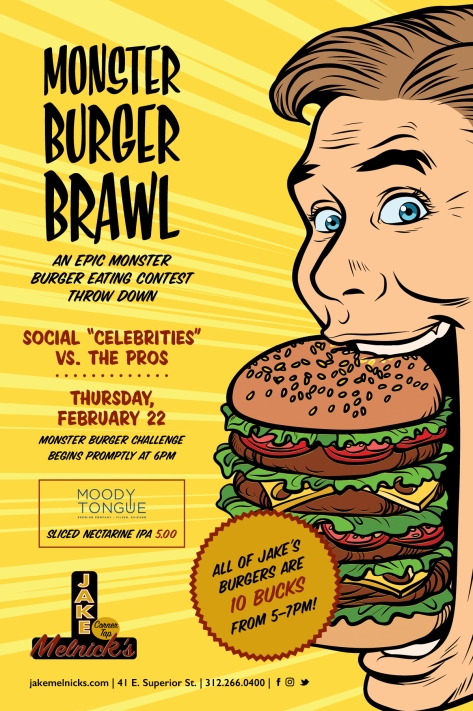 Who is competing? Professional eaters, Pat “Deep Dish” Bortoletti and Tim “Gravy” Brown from Taco in a Bag will take on a team of five local social media influencers (see below) to find out who can fastest conquer the 8- lb Monster Burger.

Shelley of Chicago Is My Boyfriend (IG)

A toast to @exitstrategybrewing as they celebrate six years of brewing. This Rufas' Best Boy Breakfast Porter in no way tastes like a syrup bomb. It's sweet, but also bitter, roasty, and finishes dry. Well done. A great beer for watching the #masters on a rainy Chicago day.
#latergram post from a few days ago: @crystallakebrewing 2019 Rye BA Imperial Stout, a @fobab winner. I wanted to age it to see how it would do. Oh, it do just fine. 😀
Attention nerdizzles...@skeletonkeybrewery & @miskatonicbrewing are D&D pals, and they brew pretty well, too. I'm impressed AF by this Barleywine, I must say. (That's why I'm posting it. 😉)
Irish Whiskey BA Udder Madness Milk Stout from @imperialoakbrewing. -- really good barrel character! #happystpaddysday🍀